Football is nothing without its fans. It is safe to say that footballing enthusiasts are one of the most passionate devotees in the world. They support their respective clubs and countries with every inch of their soul. A loyal fan will never leave his side, even during its worst. A football fan will religiously enjoy a 0-0 draw while watching the match wholeheartedly. That’s what makes this beautiful game more special.

Having said that, the same passion turns out to be dangerous once in a while. The love for the team makes the fans go wild and violent. We have seen the fans storming the field when their team goes a goal down. There have been many incidents where the match had to be stopped due to such behaviour. The fights between two rival clubs have accounted for countless injuries and hundreds of deaths on many occasions. Let’s have a look at some of the worst scenarios caused by the fans in football. The police were forced to use firing tear gas, which is banned by FIFA, to get the crowd under control. However, it only got worse as it led to a stampede as the fans were trying to exit the stadium. Some fans got injured due to the suffocation, and others were found dead in the stampede. Many people were reported dead in the panic caused, including two police officers and many children. The Indonesian police reported a total of 125 deaths, and more than 300 people were admitted to the hospital, many of whom died before reaching the hospital and also during the treatment. It is undoubtedly one of the worst moments in the history of any sport.

A dispute between the Nice and Cologne fans resulted in the delay in the kick-off time during their Europa Conference League match at the Allianz Riviera on September 2022. The UEFA Governing body released an official statement stating that the reason behind the delay was crowd disturbance. The footage on social media showed the Ultras throwing flares into the ground while fighting with other fans. French media publication RMC Sport later reported that one fan was heavily injured after falling from the stands.

Cologne released an official statement quoting: ‘Unfortunately, the start of the game is delayed due to violent clashes between fans in the stadium and the stands. We are looking into the background,’ the German club quoted. Cologne captain Jonas Hector even had to come out and address the away fans through the PA system. ‘We want to play the game with you. We also want that game to take place. But we have to say that we do not like to see this,’ he said. ‘We worked damn hard last year and in the playoff. And we would very much like to do this with you and ask you to keep calm and support us as much as possible.’

Now, this incident sums up the football fans for you. It is one of those incidents that will make you angry and surprised simultaneously. Now we have heard fans of Arsenal and Liverpool fighting with each other in India, but here we got fans of Brazil and Argentina getting into a tussle with each other. The FIFA World Cup fever got high in India, especially in the states like Kerala and Kolkata. While team India is yet to qualify for the World Cup, the footballing fans of India have already picked their favourite countries to support apart India. 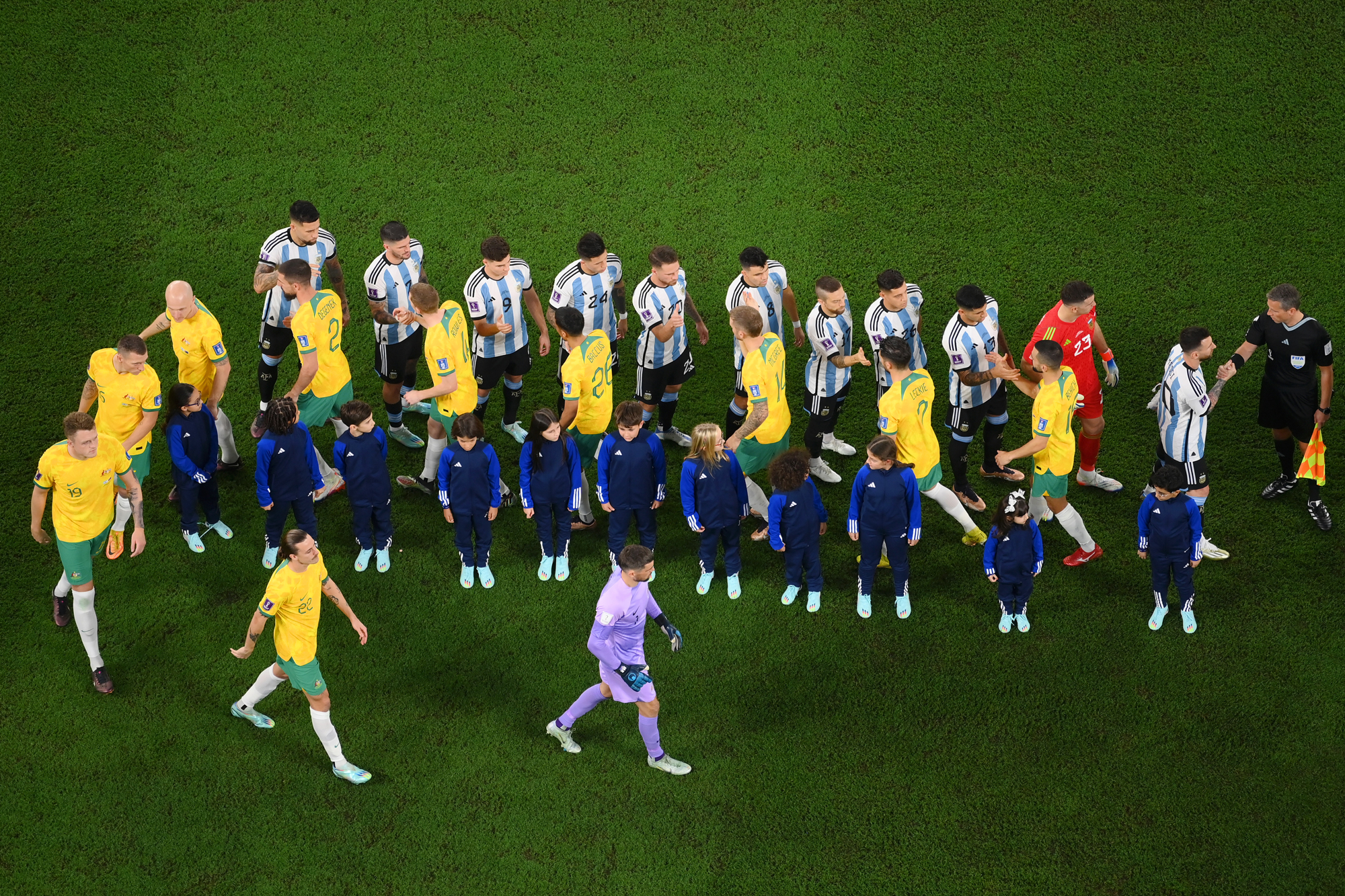 DOHA, QATAR – DECEMBER 03: Players shake hands prior to the FIFA World Cup Qatar 2022 Round of 16 match between Argentina and Australia at Ahmad Bin Ali Stadium on December 03, 2022 in Doha, Qatar. (Photo by Mike Hewitt – FIFA/FIFA via Getty Images)

Players like Cristiano Ronaldo, Lionel Messi, and Neymar are highly influential, and they have their fans everywhere. Similarly, they have got Indian fans rooting for Portugal, Argentina, and Brazil in the absence of India in the FIFA World Cup. In the recent video, which was taken in Kollam, Kerala, we can witness Argentina and Brazil fans getting into a fight with each other during a rally passing through the Sakthikulangara area. A case was registered at the Sakthikulangara PS in Kollam for the same matter.

Brazilians love their football, and sometimes this passion for the game gets the better of them. A fan was killed before the match between Cruzeiro and Atletico Mineiro in March of 2022. The report adds that the 25-year-old man got shot in the stomach and was later announced dead in the hospital in Belo Horizonte. Another fan was shot in the shoulder during the incident. However, he survived the shot as he was declared stable. Cruzeiro and Atletico Mineiro, the defending Brazilian champions, were set to face each in a regional championship game.

Fans of Gillingham FC and Rotherham United invaded the pitch during their match in April 2022. The fan invasion later turned out to be a huge fight between the supporters of the two teams at Priestfield Stadium. The police arrested 20 or more people, and they were sentenced to unpaid work and jail time. Some of the fans were also banned from entering the stadium for at least 10 years.

Superintendent Ray Quiller of Kent Police said: “There is no place in football or elsewhere in society for the type of violence and behaviour that occurred following this match. In the presence of genuine football supporters, including children, the actions of these individuals were unacceptable. Football Banning Orders were introduced in the late 1980s to help improve safety at matches. They remain an essential power at our disposal despite there being far fewer incidents today than there were back then. I am pleased to see them given in the circumstances of this case, and we will continue to seek these against offenders who act in this manner at football matches.”

Gillingham’s co-chairman, and chief executive, Paul Fisher, said: “The football club is pleased to see that the police have dealt with the unsavoury incident which occurred following the final whistle against Rotherham United. “Such behaviour will not be tolerated at a family club such as Gillingham.”

Court prosecutor Pietro Matarazzo said: “It was the league one season’s last day, and Gills would go down if they lost, and Rotherham would go up if they won, and there was a large-scale pitch invasion.”